Its been tempting to focus only on the very early years but Queen also visited Cornwall in 1973 and 1974. The former gig is not well documented, but John Adams, proprietor of The Winter Gardens in Penzance, e-mailed Queen in Cornwall to say that they were added in July of that year at the last minute as a support act to Caravan. 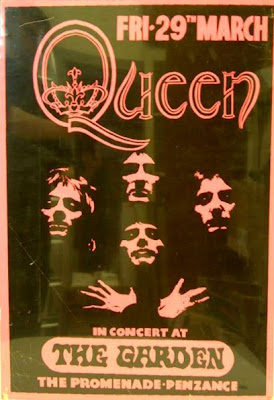 As this poster proves they were the headline act when they came back in March the following year, even though at this stage they 'd only had the one hit: 'Seven Seas of Rhye'.

UPDATE 18/6/10: John has just sent me a copy of an original poster still in his possession (below). Thanks very much John. 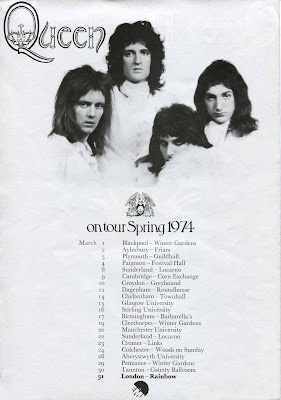 UPDATE: 21/6/10 email from John: Yo' Rupert, I am pretty sure it was last minute because I remember we did not need a support for Caravan as they took up most of the stage and played a long set. The agent phoned and really pushed me to take them on, telling me it was important for the band to get a support as they were in the area and the drummer in the band came from Truro. I agreed and paid them £25.00. Hence when they 'broke' six months later they wanted to play gigs where they had been well-received...
Posted by Rupert at 22:53