This page isn't strictly a postscript, but more a way of recording information that comes to light after the publication of the book.

Firstly during the afternoon at The Driftwood (when 'Queen in Cornwall' was launched as an initial print run of 200) our guests said a few things of interest that are not in the book. I particularly remember Jill Johnson saying that she cut Roger Taylor's hair into the 60's mod bob featured in the photo on p126. Also Mike Grose explaining that he was on Porthpean beach when he first heard Queen on national radio and realised that they were going to be successful.

The day after the party/launch Neil Battersby sent me this e-mail which I thought interesting and worth posting:

Rikki and I had a great time today at the Driftwood, meeting old friends
and reliving memories. In looking though the book two things come to mind:
1. Pages 37 and 41 in your book show a school photograph. The boy to the left of Roger is not Mike. It is Jeff Webb, who was also in the same
class as Roger (1S).
2. A fan asked if we drank a lot at the gigs. The answer is "no", but it
did remind me of a fact that I certainly had forgotten. After we had
packed up we did our best to find a milk vending machine on the drive
home. These are now extinct, but in those days were very common. We were
told to drink a lot of milk in those days. Roger used them the most,
referring to them as "metal cows".


The weekend after the Driftwood event a group of us think we found the spot where Freddie was photographed in the landscape for the back of Queen 1.

Jim Jenkins describes our trip nicely on the official Queen website in this article. Personally I wasn't convinced it was the exact spot that we found - but I am convinced that the photograph was taken somewhere in the Devoran valley. 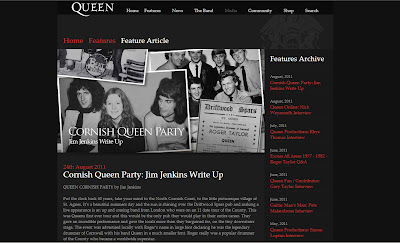 In fact Jim has also been discussing other aspects of the book with me over the last couple of weeks. Today he sent me a text saying that he'd been looking at the notes he took after interviewing members of the band in the late eighties - and they say that on one occasion Brian failed to make a booking at PJ's and it was played instead by Tim Staffell on lead guitar, and Mike Grose on bass. Significantly they also say that Freddie Mercury sang the last song - and sang the encore of 'Jailhouse Rock'. This would fit with what both Sue and Pat Johnstone said to me.

Jim (through his contacts in Liverpool) was also able to recognise the 4th person on the balcony on p.202. Its someone called Steve Levin who was a mutual friend of Ibex and the Maria Assumpta girls.