Jim Jenkins and the missing advert 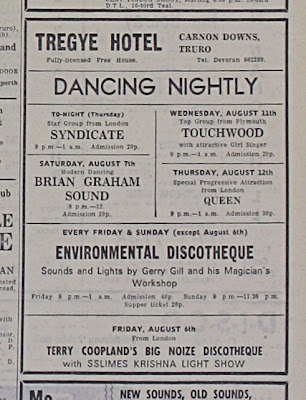 Spoke for ages on the phone to Jim Jenkins this evening﻿. Jim wrote the official Queen biography with Jacky Gunn published in 1992. Jim was one of Queen's first fans and got to know the band well over a long period of time. He was given a lot of memorabilia by the four members of Queen, and for example, was given a copy of the above ad from the West Briton 1971 by John Deacon. Its one that I'd missed first time round. Easily done...Queen's name is written in such minute lettering!
John also kept a diary for a number of years, I believe, in which there are some details of the early gigs, including the gigs in Cornwall in 1971. This was source material used by Jim in the book and passed on later to others, like Martin from queenconcerts.com. Interestingly, talking of memorabilia: John also, apparently, has recordings of Queen made by the late John Harris, their soundman, going back to their first concert in the City Hall in Truro, and possibly before.
Posted by Rupert at 07:04 No comments: 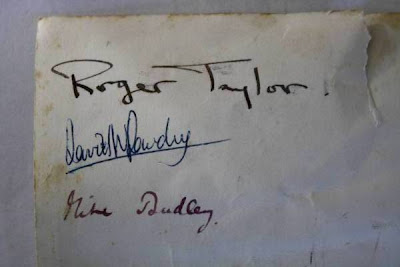 Tonight I met up with Jenny Doble who lives in St Agnes. She has a photograph of Beat Unlimited that she would have been given, probably by Mike Dudley, in 1963/64. Jenny kindly let me copy it, but what is interesting is the fact that the three boys signed the back...

Jenny grew up in St Agnes and knew Mike from about the age of 7. She thinks she probably met Roger Taylor for the first time either at a Beat Unlimited gig or - wait for it - at ballroom dancing classes in Truro! She remembers Roger as being one of the smaller boys at the classes which meant that dancing with him was rather clumsy and awkward as she was much taller...

She is still in touch with the other member of Beat Unlimited: David Dowding and his wife.
Thanks Jenny...
Posted by Rupert at 19:46 No comments:

I've still to find any photos that were taken of Queen on their tour of Cornwall in 1971....but for a long time I've been wondering if this picture of Freddie on the back of their first album was taken in the creek in Devoran where they stayed that Summer... 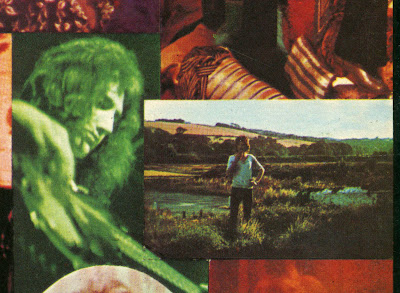 This short biography was written for the Truro School Magazine by a pupil. The prose is very sixth form and its not very accurate, but it's interesting because it seems to have been based on teachers recollections.

Roger Taylor is the drummer in the super-mega-ultra etc. group Queen. His greater claim to fame, however, is that he is a Truro School old boy.

Born Roger Meddows Taylor on the 26th of July 1949 in West Norfolk, he first came to Truro when his parents moved to Falmouth Road in 1957. In fact, Mrs Carruthers’ son does Roger’s mother’s hair. He spent one year at the Cathedral School, and was a member of their choir. At the age of eleven, in 1960 he won a place at Truro School under the direct grant scheme. Roger Taylor initially took up the guitar, but eventually ended up playing the drums. This was to become an all-absorbing occupation, and one in which it was recognised at the early age of sixteen or seventeen that he had great talent.

In 1966, he formed a group called ‘Reaction’, with Mike Dudley as guitarist. Other members included Steve Passmore and P. Stethridge. This was probably the best group Truro School ever had. Consequently Roger Taylor was very popular and was in with the ‘in crowd’ as they would say in those days. Mr N.J. Baker was in the same year as Roger. He remembers a birthday party held behind St Mary-Clements with Reaction playing. Roger was a ‘magician’ on the drums. The group used to play and rehearse in the old gym.

Once, whilst going between gigs, in the Volkswagen van, they had a serious accident. One member of the group was seriously injured, but Roger was unharmed.

In those days, the school had streams A, B, C; Roger was in the B stream and tended towards the sciences. Roger is remembered as a shallow, pale-faced, wide-eyed, effeminate-looking person by the teachers who knew him. Mr Weeks was his form teacher in the third year, Mr Taylor in the fifth and lower sixth. He was taught Chemistry by Mr Edwards and Biology by Mr Jackson. One thing they all remember was that his drumming took priority over his work. He was quite intelligent, and with more work he would have done much better but even so he obtained seven ‘O’ levels. Roger listed amongst his hobbies drumming and driving. The fascination with the latter led to his writing, ‘I’m in love with my car’, which reached number one in the charts in November ’75.

Everyone expected Roger to leave after his 6th year, but he came back to the upper sixth took Biology, Chemistry and Physics. He then started a dentistry course – on the advice of Mr Taylor – at the London Hospital Medical College in Whitechapel but he gave up the course after one year. Eager to continue his drumming, he answered an ad, and started the group ‘Smile’ with Brian May and Tim Staffell. Later Staffell quit and Taylor set up an old clothes stall at Kensington market with a certain F. Mercury. During this time, Mr Baker happened to see him at his Kensington stall, and they talked for some time. Mr Baker does not remember seeing a dark-haired, flamboyant Persian with him.

In ’69 Roger took up a degree course in Biology at the North London Polytechnic, and eventually got his degree. Mercury joined ‘Smile’, and Deacon was accepted after an audition.

In July ’71 they came down to Truro for two months and played the local gig circuit. The rest is history.

I am presently trying to contact Roger Taylor. Who knows, I might persuade him to do a concert in the sports hall with three of his mates!

The last word goes to Mr Taylor who advised him to take up dentistry as there probably wouldn’t be much money in drumming.

James Daniel.
Posted by Rupert at 08:26 No comments: 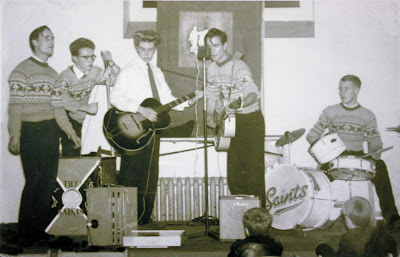 Thanks to John Northey for these images. John plays now in a band with Roger Brokenshire. Here he is in the late fifties playing with the Saints. The Saints, which included the Treloar brothers Leon and Max, have the distinction of being the band who won the skiffle competition in 1958 in Truro City Hall. Other members on stage are Finton Lawley and Ginger Pascoe. They are all about 16 in this picture which was taken around the same time. John still has the original guitar. He explained that whilst you couldn't buy electric guitars in Cornwall in the late 50's you could get a pick-up and fit it to an acoustic guitar, which is exactly what all the skiffle groups did.
He also has two nice images of the stage at the Flamingo Ballroom. In the first he is playing with a band called The Rebels, with his mother playing the piano, Jack Pascoe on the far left and Joy Simpson's son playing drums. He said that the stage went back a long way and in the picture they are infront of the curtain. In the second image, sporting a spectacular quiff, he is on stage with his cousin, who it has to be said looks not unlike a Cornish Marilyn Monroe. Lastly an image of the Flamingo being demolished in 1980. There are very few pictures of The Flamingo Ballroom and if anyone reading this blog has any others please contact me! 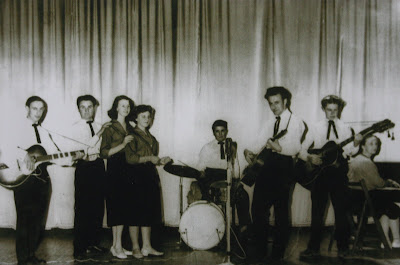 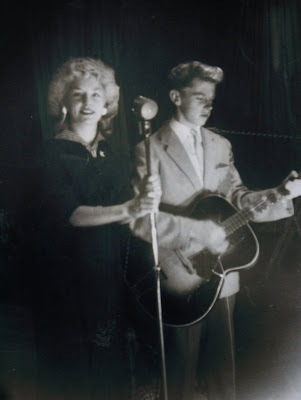 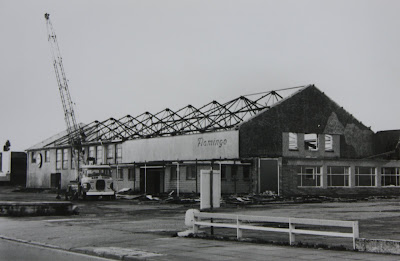 Reaction gigs in the Cornish Guardian

The Reaction had a manager/booking agent in Bodmin who would have been well placed to find them gigs in East and North Cornwall so I have put my anorak back on and started going through adverts in The Cornish Guardian (which has a different circulation to the main Truro-based paper, The West Briton) expecting to find quite a few concerts not already listed in the other papers...so here goes... 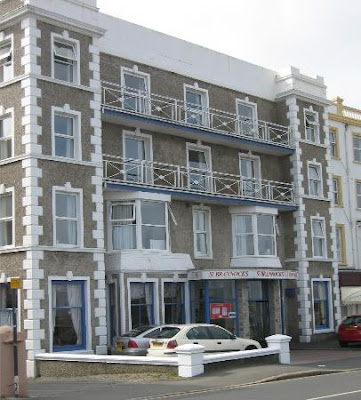 1965 only two:
July 17th Werrington Park near Launceston 'Something for everyone at the North Cornwall Conservatives Beat and Barbeque'
December 24th St Brannocks Hotel, Newquay (picture above) 'Big Beat Dance 8 to 11.55'

nb some of the ads have R.O.A.R. on them meaning right of admission reserved....
The September gigs are significant because one of them could be the last ever gig by The Reaction...Its certainly the case that during that Summer they are frequently listed as The Fantastic Reaction and so it seems likely that the gig on the 14th intentionally leaves out their name: and assumes their audience knows that its them.
Posted by Rupert at 20:00 No comments: