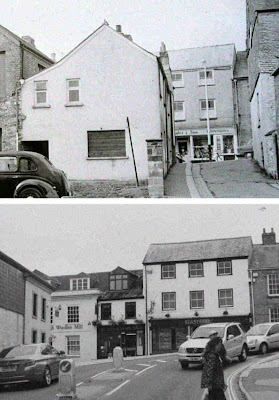 As I hoped Bob Acton's second book on Truro has saved me from having to read lots and lots of microfilmed local papers. It gives some important clues as to the redevelopment of Truro in the sixties. One of the things it says is that the greengrocers on Pydar Street that is now Easybet (just visible in top picture) was called GW Slater's. In the photo 'ater's is just visible. Connie Bawden said that it was still there when PJs was there. Also it looks very much as if this photo is from the 50s or even earlier (unlike the museum catalogue where it is dated 1968 I think). In May 1962 the junction of Moresk and Pydar was widened. It was one of the first bits of redevelopment in the area (see entry below) and I think there is the implication that the white building and the buildings on the right could have been 'razed' then - which is why Pete and Mike dont recognise the PJs building in the picture.
Also
1953 City Hall was leased as a cinema in the early 50s. in '53 the lease came to an end.
1957 New science block opens at Truro School
1958 (july) The Saints beat 14 other groups in a skiffle contest at the City Hall. There is another contest in October.
1959 (feb) Another skiffle contest won by the Imperials.
1960 (sept) The Cathedral School moves from the Cathedral Close to Copeland Court in Kenwyn . This would be just after Roger Taylor had left to go to Truro School.
1962 (april) City Council Redevelopment Committee agree plan to redevelop Pydar Street area of Truro
1962 (may) Houses at the junction of Pydar Street and Moresk Road are demolished to 'make way for a wider sweep in the road'
1963 West of England Properties are awarded contract for redevelopment. Plans include car park and supermarket.
1966 New ring road (A39) is under construction.
1966 (november) Bulldozers are at work demolishing the cottages of Boscawen Row as the Pydar Street development gets underway.
1967 (november) Following a long period of inactivity by West of England Properties, the contract is ?renegotiated and given to Hearts of Oak. The building work is to be undertaken by Dudley Coles.
1968 (january) Work is under way on the inner circuit road. Most of Albion Place is being demolished along with buildings on the north side of St Clement street.
1968 (november) The developers announce that the scheme faces indefinite delay unless County Council grants compulsory purchase orders for several properties.
1969 (june) construction of the big roundabout at Trafalgar is underway (previously Trafalgar Square)
1970 (march) The last demolition work on St Clement Street is taking place as the inner circuit nears completion.
1970 (june) Tregolls Road dual carriage way is now ready for use
1971 (july) Developers proposals for multistorey carpark and new post office are agreed
1972 (january) Work starts on High Cross multistorey carpark
1974 (october) David Penhaligon is elected as MP
1976 (july) Tescos application to build Cornwalls biggest supermarket is approved.
Posted by Rupert at 21:34