I thought I'd found all the members of The Reaction (Roger Taylor's group in Cornwall) I was likely to find, then today out of the blue I was really excited to receive an e-mail from Geoff Hawkey who is the bassist that played on their tour of Devon in 1966. 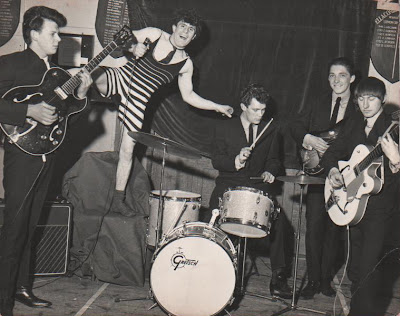 What was interesting is that Roger 'Sandy' Brokenshire, who was The Reaction's singer at the time, was the person who had suggested he play with them. Geoff already knew Sandy, as he had been the bassist with Brokenshire's band 'Sandy and the Rockin' Rockardo's' (above)) when Brokenshire was working up in Devon with Lionel Digby .

Geoff remembers meeting The Reaction, rehearsing with them in The Old Cop Shop in Torquay, before then playing in Barnstable, Wadebridge, South Brent and Bude...
Posted by Rupert at 21:41