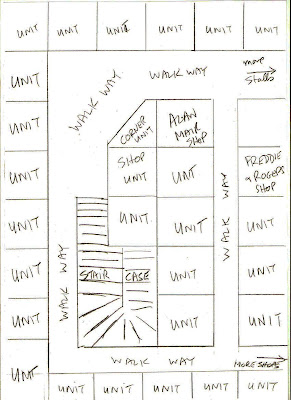 Alan Mair, who employed Freddie Mercury to work at his stall upstairs at Kensington Market has drawn this map of the market that gives a really good sense of how the different shop units related to each other. The market closed several years ago and there are remarkably few photos of it as it was in the early 70s (or indeed later). If anyone has any please let me know!!

Freddie worked at the market between 1969 and 1974, most of that time working for Alan, but for a while running his own stall with Roger Taylor. Their stall was about 10ft by 10ft. 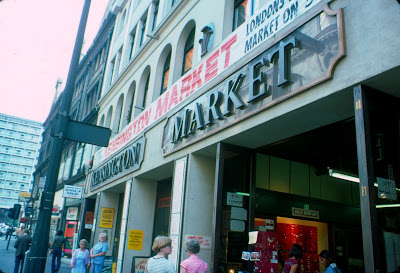 Pat and Sue Johnstone who were originally Rogers friends from Truro, have explained to me that they first set up the Queen fan club whilst working in their own shop-unit which I believe was near Alan's...will need to clarify this. (nb its a bit misrepresentative to call them stalls because they were rooms with fairly solid plaster walls between them - so more like an old fashioned arcade or modern mall)
Posted by Rupert at 08:35