Just been speaking on the phone to a man called Roo Fairbairn who still lives in Cornwall and was a contemporary of Roger's at Truro School. He remembers seeing The Reaction play several times. A guitarist himself, he later lived with Les Brown in Halford Road, Fulham. The fancy dress party that is immortalised on the back cover of Queen 1 took place in the Halford Road flat. He says he took lots of photographs that night, incuding some that feature on the album cover, and what is more he still has some of them (but sadly not the prints used in the actual collage because he would have given them to Queen, and the original artwork was subsequently lost in the EMI offices somewhere). More to come on this, but in the meantime Brian May himself has written about this on his own website recently:

And below ... here's the rest of the back cover ... including some pictures of the four of us at a fancy dress party given by our friend Les Brown, I seem to remember. (I think it's time Roger and I wrote that book!!!) I am a penguin, of course, Roger is a Mad Hatter, John is ...erm, I'm not sure ... and Freddie is ... some kind of dashing cavalier ... there are also live pictures of us playing the Albert Hall (as Smile, actually) - at the Marquee (as Queen), at least one taken in Trident Studios, and, at the bottom, stills from our first photo session at Freddie's flat in Victoria Road, decked out with Biba artifacts. This session produced our first poster. The chess piece and the playing card are of course the White Queen and the Black Queen, already in existence in our heads, but to emerge later on Queen II. And in the middle of it all ... Deacy hiding behind a feather, and, largely ignored for about 40 years, a 3-D Drummer. 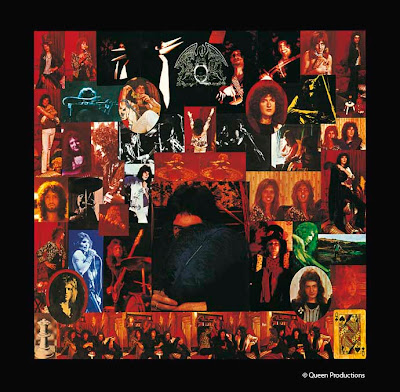