I spoke with Pat Johnstone on the phone for more than two hours a couple of nights ago. She had some really fascinating memories of the years either side of Queen's first gig in Truro City Hall in 1970...From working in the Navy Arms, to seeing Freddie sing with Smile at PJ's, to putting Freddie and Brian up in her house in Truro the weekend of the gig, to working in Kensington Market, to setting up the Queen fan club. Thankyou Pat if you're reading this. 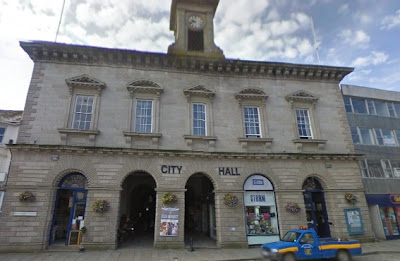 Thanks to http://www.kernowbeat.co.uk/ here is a recent picture of the City Hall. This facade has not changed since Queen played their first gig there....
Posted by Rupert at 21:47