Penny North of the Jayfolk

Jill Johnson sent a copy of this photo of The Jayfolk to me a few months ago...and I wondered if there was a story behind it. Penny who joined Jayfolk at the beginning of 1967 was able to explain that this was the Jayfolk's Austin van which was written off after an accident only a few weeks after the accident that their friends The Reaction had had in February. (At the time Jill and Sue of Jayfolk were going out with Roger Taylor and Mike Dudley of The Reaction). Penny stayed in touch with Roger Taylor, and got to know Smile and Freddie Mercury. She stayed with them in Barnes, and they stayed with her in Grampound. She also helped secure one of Queen's first concerts at Balls Park College, which followed a Smile gig the previous year. 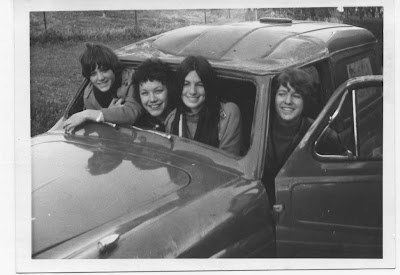 UPDATE 29/11/10﻿ Looked in the West Briton1967 March to June and Oct to December. Couldn't see record of accident which occurred travelling back from a second round audition for Opportunity Knocks...the X-Factor of the day.
Posted by Rupert at 20:42